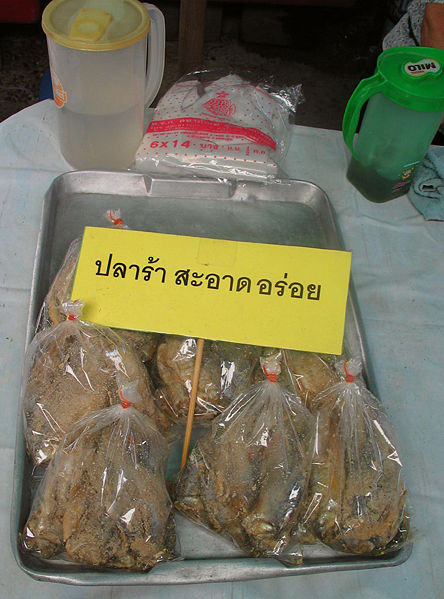 Pla ra is fermented fish sauce, popular in Northeastern Thai cuisine. It is made by pickling several varieties of fish, mainly Snakehead Murrel. The fish is cleaned and cut into pieces, after which it is mixed with salt and rice bran. The whole is then left in a big jar covered with a wooden lid, to ferment for three months to a year.

It is more pungent than nam pla, and, in contrast to nam pla which is a clear liquid, pla ra is opaque and still contains pieces of fish.

Pla ra sauce is commonly added to a number of preparations of Isan, Northeastern Thai, cuisine, such as som tam and certain types of nam phrik, as well as to some other dishes, all of them originally from the Isan region of Thailand. There is also a dried powdered version of pla ra that has been successfully marketed recently.