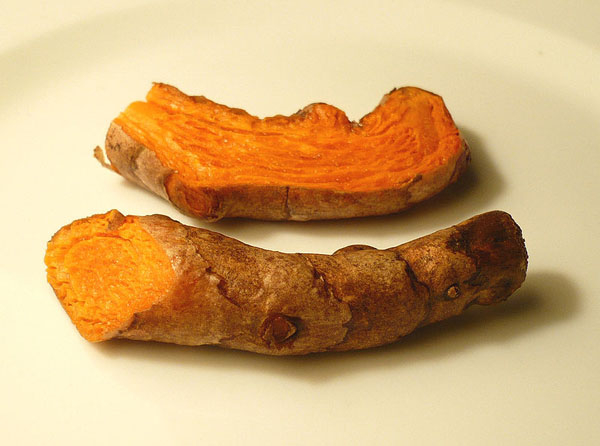 This yellow colored root is often used in dishes of Muslim/Southern Thai origin and in Northern Thailand for Northern style curries.

Turmeric is a rhizomatous herbaceous perennial plant of the ginger family. It is native to tropical South Asia and needs temperatures between 20 °C and 30 °C (68 °F and 86 °F) and a considerable amount of annual rainfall to thrive. Plants are gathered annually for their rhizomes, and propagated from some of those rhizomes in the following season.

When not used fresh, the rhizomes are boiled for several hours and then dried in hot ovens, after which they are ground into a deep orange-yellow powder commonly used as a spice in curries, for dyeing, and to impart color to mustard condiments. Its active ingredient is curcumin and it has a distinctly earthy, slightly bitter, slightly hot peppery flavor and a mustardy smell.